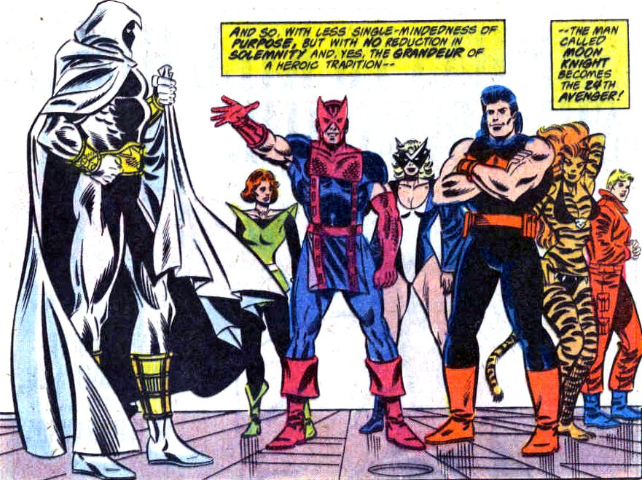 Wasp is still hanging out with the West Coast team when her ex-husband comes running in and says his first wife is still alive. (Note: For fun he hacks Russia’s network.)

I didn’t even remember he had a first wife.  Probably because this is her first appearance–her name is Olinka Barankov.

She’s being held prisoner in Communist Hungary, and the team goes there to rescue her, where they meet a bunch of villains we haven’t seen since Pym was a Red-Fighter back in the 1960s.  Turns out, these villains had laid a trap, and they fight and capture the Avengers. 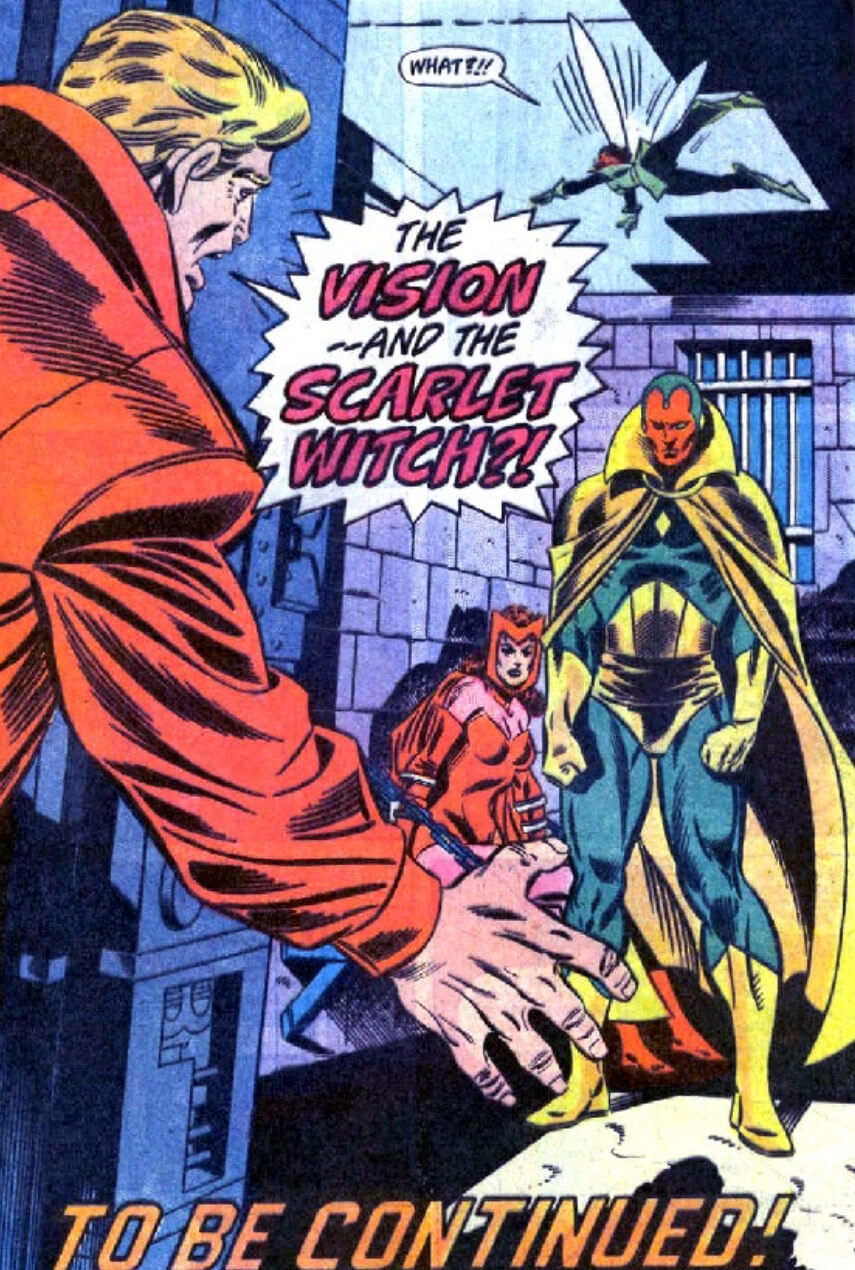 Jan and Hank escape and, while searching for Hank’s ex-wife (instead of freeing their teammates), they find Vision and Scarlet Witch.  They were tricked and imprisoned when Bova, the She-Cow (modified by High Evolutionary) who raised them), asked them to come to Hungary. 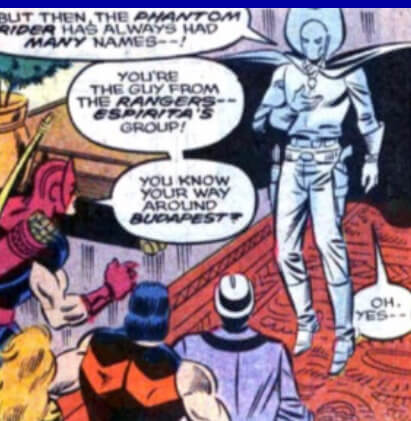 Meanwhile, the WCA team are released from prison, but Moon Knight and Mockingbird are identified as SHIELD agents so they are still held captive.  The freed heroes go to the American Embassy where Phantom Rider is hanging out.

Anyway, Mockingbird and Moon Knight, it turns out, are in the same prison as Vision and Scarlet Witch.  So of course they all wander around the halls and find each other and then…

Actually, he was behind the whole thing.  He lured the team to Hungary to prevent them from stopping him from becoming “King of the Evil Mutants.”

This is stupid.  And ridiculous.  If you’re going to stop a classic Evil Mutants foe, you lure and trap The X-Men.  Or the real Avengers.  But even if you think your biggest problem is the West Coasters, you kill them—not imprison them. Killing is more evil than imprisonment.  Quicksilver going crazy makes Scarlet Witch think it will happen to her, too.

Anyway, after a pointless and stalemated fight with Quicksilver, the rest of the team shows up.  And in case you’re wondering why Phantom Rider is in this story…Mockingbird finally tells the story of how he raped her and then she killed him, in the past, while the team was time-traveling to stop Kang.

But rather than have a good character moment, some giant bugs show up and there’s another fight.

The full group of heroes now escape and are flying away when they pass over Latverian air space and Kristoff, who is the current ruler of Latveria, shoots them down.

You didn’t think you were getting out of this story that easily, did you?

Kristoff is trying to be the new Dr. Doom, and wants The West Coasters to help him take on the real Doom.  To convince them, he holds them hostage and makes them fight robots and stuff in a series of tests.  He’s not a very good negotiator. 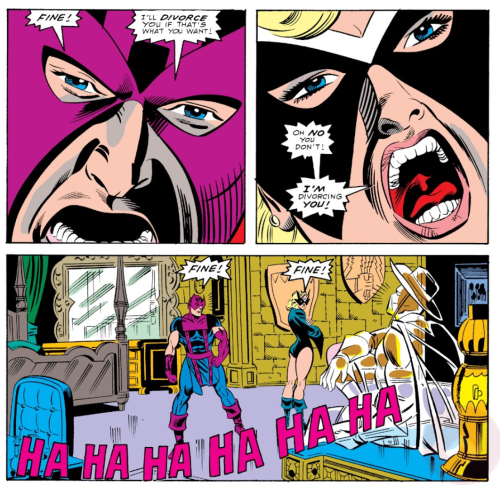 Hawkeye and Mockingbird, rather than try to escape, decide to argue about the Phantom Rider stuff.  Hawkeye blames the rape victim and Bobbi threatens to leave him.  The ghost of Phantom Rider is lurking in the room and laughing at them.  Literally.

This is juxtaposed with Hank and Jan also arguing, and Hank trying to get touchy feely with her.  In the middle of all this bizarre chaos.

Speaking of which, this team has been doing a good job at showing how lame they are so far: They can’t beat a bunch of has-beens who Ant-Man defeated back in the 1960s.  They can’t break out of a communist prison.  They can’t take down Kristoff, who is nothing like the real Dr. Doom.  And the guy who saves them from Kristoff’s prison? 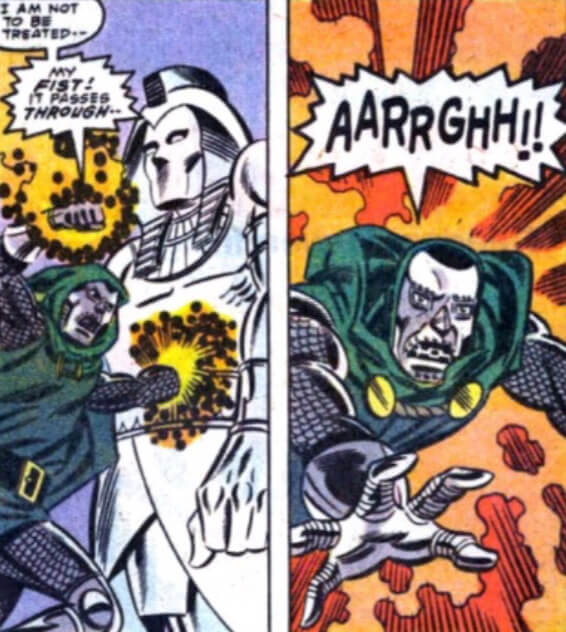 I’ve said before that what they do to Moon Knight in this series changes the hero forever (and not in a good way), and this is what I meant.  Moon Knight was best as a schizophrenic who believed in a moon god.  He’s worst when his multiple identities are completely ignored and there’s a real moon god who physically manifests to pull his fat out of the fire.

After all that, Quicksilver shows back up and now he’s allied with The Voice, another old Tales to Astonish villain who can make people do whatever he says.

So the team and Koshnu now fight those two and a bunch of machines, and then they finally reach Hank Pym’s ex-wife.  Yeah, she actually was alive.  And she’s been given psionic powers and held prisoner since the 1960s.  She uses her powers to defeat The Voice, the team escapes, and Hank decides to try to help his ex-wife (who is actually his real wife, since she’s not dead and they never divorced), and then use his science to try to help her recover from the evil experiments done on her for the past 30 years.  Yeah, because you want a wife-beater to be responsible for the mental health of a woman who has been held prisoner and tortured for 30 years. 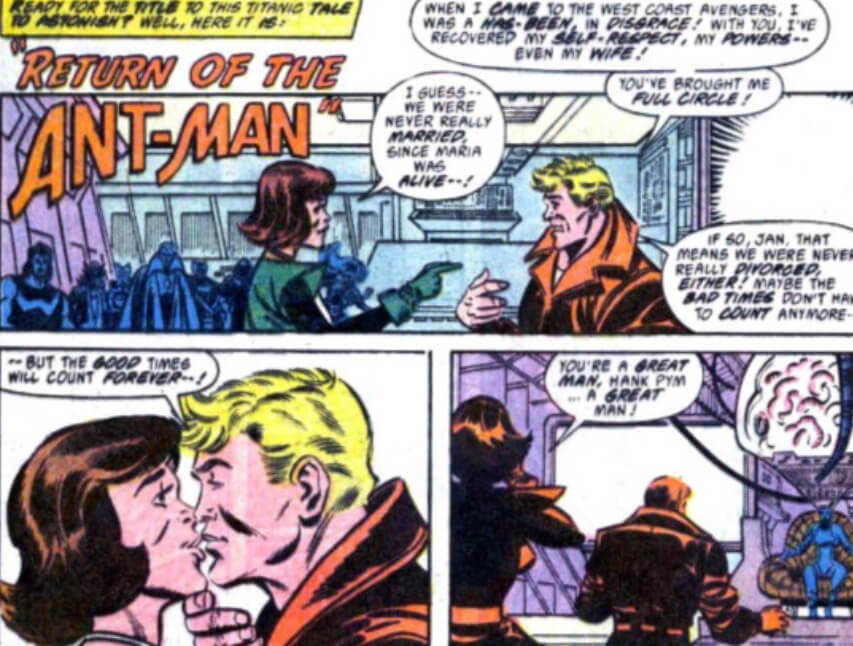 There’s even this horrible scene where Jan calls her old abuser “great.”

There’s a lot that could have been fun here—old campy Tales to Astonish villains coming back and all—but it’s mixed in with really, really awful character moments and a pointless Quicksilver story that never really gets resolved.

Oh, and Mockinbird officially dumps Clint–after all the drama above. 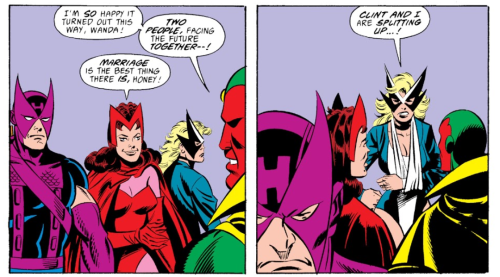