“Half a Life” is when Gotham Central hit its groove.  That’s not to say that the first five issues weren’t good.  They were.  They were groundbreaking, in fact.

But with Greg Rucka’s first “solo arc,” the series found its center as a book where “real people” would meet with the freaks and metas that dominate Gotham.  And the book would emphasize “real.”  In the last arc, Ed Brubaker told a story about how cops deal with death and loss, offering several very human moments–the likes of which had rarely (if ever) occurred in Batman before.

And with this arc, Renee Montoya is outed, violently and suddenly, as a lesbian.

From there, we get a brilliant tale of blackmail and male sexual domination.  It’s one of the best stories ever told in comics. 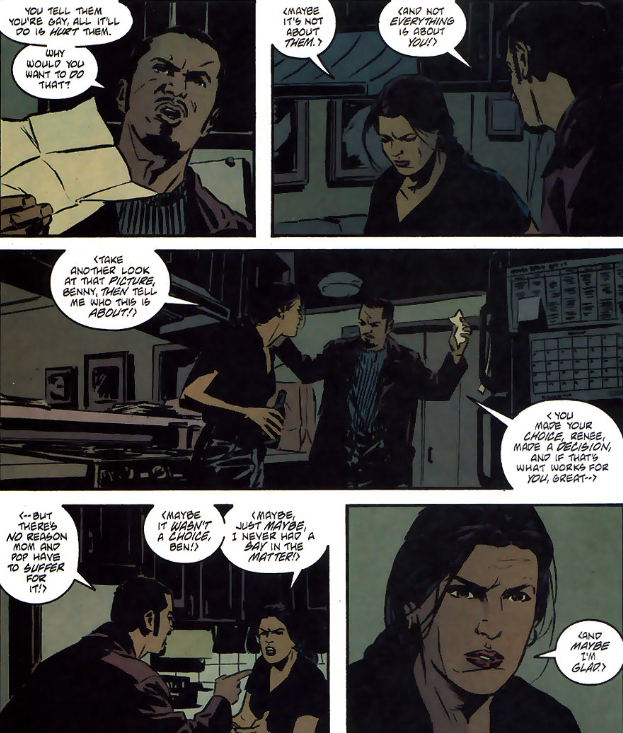 In this scene, Renee and her brother talk about the effect of coming out of the closet on her relationship with her parents—who don’t speak English. I can’t think of any 2000s superhero comic—or even many non-superhero books—that dealt with issues like this, particularly in such an intimate, detailed way. Maybe the reason Gotham Central was never a huge seller is because many superhero readers just don’t want to hear about real people and realistic problems, I don’t know, but reading this comic is like reading The Wire taking place in Gotham City.

Issue #9 is where Christopher Nolan got the idea for the Joker and his henchmen’s heist at the beginning of The Dark Knight.

In the conclusion of “Half a Life,” we see the brilliance of the title: Renee Montoya can only live half her life in the open, she has to hide her sexuality because many of her fellow officers are homophobic.  And, we learn that the mastermind behind the attacks on her career through her personal life is Two Face, who also lives half his life one way, half another.  This is truly one of the greatest comic book stories ever written.