Okay, so we go from Infinity Gauntlet, one of Jim Starlin and Thanos’ greatest epics, into an obvious money grab.  “Infinity War” isn’t terrible, but it isn’t great, either.

It starts with Thanos the farmer (who somehow has computers that can scan the universe) realizing that there is a new threat arising. Which leads to question #1: Why does Thanos care about a threat to the universe?

Meanwhile, Dr. Doom and Kang are also teaming up against this new threat. That’s just a seed in issue #1, which will grow later.

We then see a rise of dopplegangers, who fight their “real” sides.  Spider-Man’s doppleganger just looks like Carnage.

The big bad is the worst evil twin of all, Magus (the anti-Warlock)….

Magus’ second in command and sidekick is Thanos’ double, or “shade” as the dupes are called in this series.  So the real Thanos is forced to team up with Warlock and Drax to beat the fake Thanos and Warlock.

The stage is set.

Drax, Thanos and Gamora have to team up.

Meanwhile, the heroes meet and Reed mansplains what’s going on with all the evil duplicates.

During it, evil (shade) Reed Richards offers the assembled heroes a Trojan Horse…

And Thor takes care of the radiation.

Everybody has an evil “shade.”  Thanos’ plays peek-a-bo with his.

The rest attack the heroes, and we get some interesting full page spreads from Ron Lim like these two below, but this story feels a bit stale. 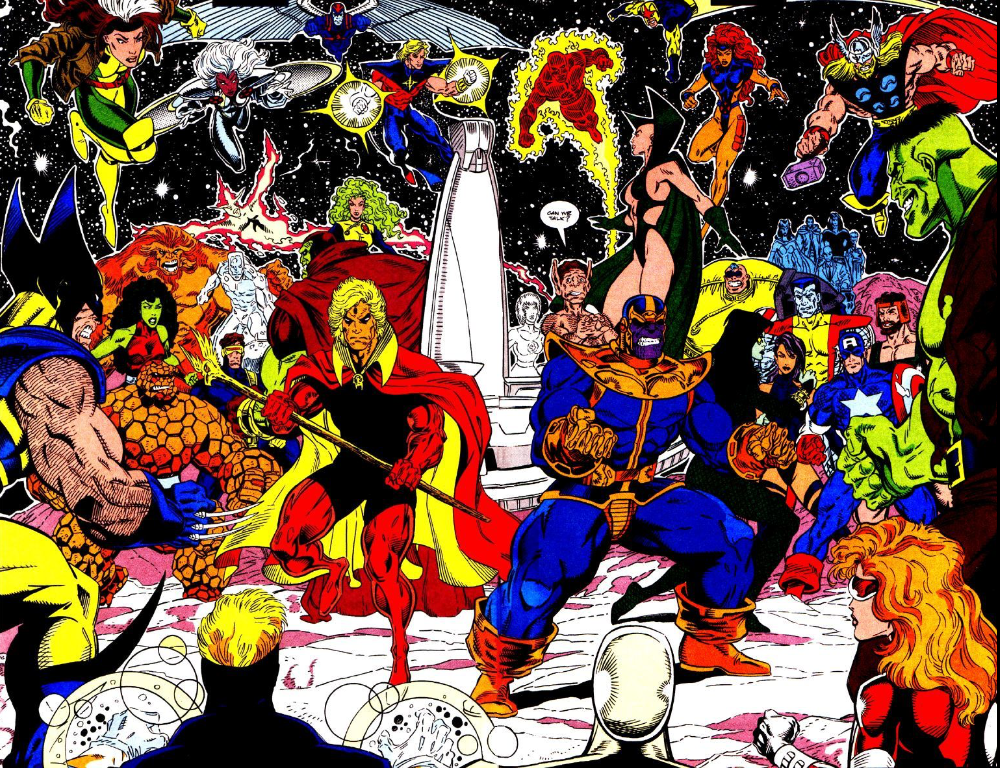 While the heroes are fighting dopplegangers on Earth, Doom and Kang sneak into Magus’ base and find the cosmic container shapes.

They’re not all cubes.

They learn Magus and the Thanos doppleganger are making a duplicate Earth, with the intention of replacing our own.

Warlock and his Infinity Watch, along with Thanos. agree that the only way to win is to reassemble the Infinity Gauntlet.

Once again, we see the powers of the gems revealed.

Unsatisfying is right. This series followed The Infinity Gauntlet, a fantastic cosmic series that proved Jim Starlin’s fringe characters could carry out a major event. Then came this one, which shoehorned just about every Marvel hero in existence into a pretty stupid story in which Thanos became a side character. How the mighty fell.

He even gave up on seducing death!

And at the very end, we see that the next big villain will be Warlock’s “good side” (as opposed to Magus, his evil side, who was behind the whole Infinity War)… 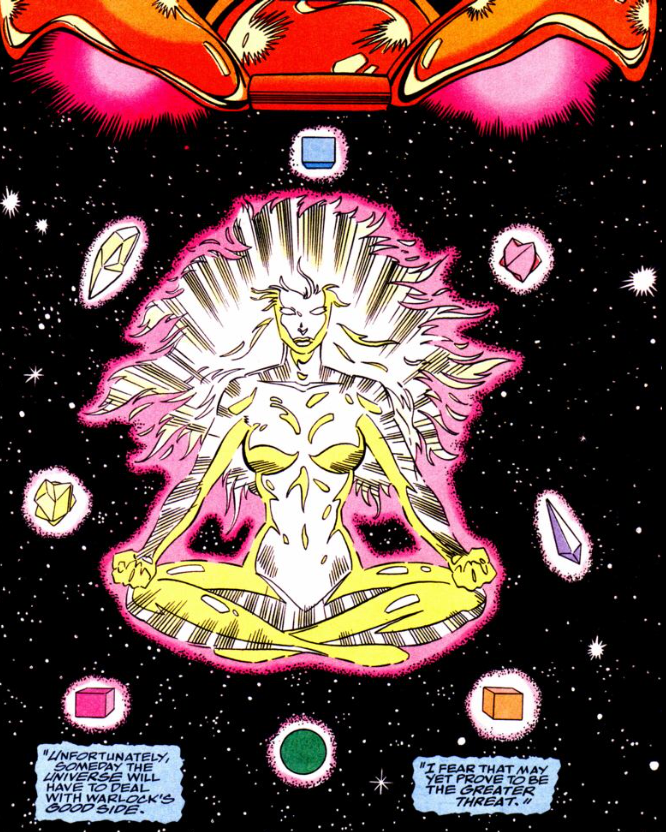