THE BEST MARVEL MINISERIES OF THE 1980s

Note: This is reprinted from my old site, where it was published in March 2014.

One thing that I enjoy about blogging: Getting inspiration from the bloggers I follow. Like this guy. Jason is cool. He recently posted a list of his favorite Marvel minis of the 1980s, and it inspired me to do the same. In fact, I may do it for other eras and/or other publishers as well.

Anyway, my list overlaps a lot with his, but not entirely…..

Picking the tenth entry for my list was hard. The 1984 series, “Kitty Pryde and Wolverine,” was good because it was the first time Wolverine acted as a teacher—albeit to only one student. But in the long run, I found I couldn’t remember much about the actual story. Elektra: Assassin by Frank Miller and Bill Sienkiewicz was genius but as a series it’s extremely offbeat. Not really a “best of the 1980s” candidate—more of a “best of Frank Miller” type of thing. And Bill Mantlo did some of his best work in 1980s miniseries (Cloak and Dagger, Vision and Scarlet Witch), but they don’t stand up on rereads.

Then there’s Roger Stern’s flawless West Coast Avengers book. The only bad thing I can say about it is that Bob Hall did the art. Not a fan. But this was the first time there was a second Avengers team, so even if you might argue that other 1980s minis were artistically better, you’ll be hard pressed to find a more influential one than this one. Also, Hawkeye got to be a leader. Like so many 1980s miniseries, it focused on b-listers and elevated them so they were more interesting than Captain America, Thor, etc.

You can’t find this on Jason’s top ten list. You can’t find it on the runners-up to his top 10, either. In fact, you can’t find this anywhere. Actually, you can find it my personal long box collection, but other than that, it’s gone. This book was as important as it was good: A solo book headlined by an African American and written by one, as well, that attempted to move Falcon from a B-lister to an A-lister. It didn’t work, but you have to salute the attempt.

The art, with #1 by the great Paul Smith and #2-4 by the good-but-not-great Mark Bright, was fine. The story was solid and creative, with #1 kind of serving as a one-and-done, and the next issues being a more extended story. The final issue gets to be a bit silly, what with a street gang kidnapping Ronald Reagan, but we get to see Falcon punch Electro in the mouth, so that’s cool.

What nobody remembers is that this is the series that established that Falcon is a mutie. That’s right. And yet, Marvel Studios still claims him for their own films. (The X-characters are not owned by Marvel Studios for purposes of film and television.)

The covers by Barry Windsor Smith are what sold this mini (literally–check out the House Ad), but the interior content by Tom DeFalco and Herb Trimpe was worth the price. The book was later reprinted as part of Marvel’s 2020 line, but this tale-of-the-future started purely as the vision of DeFalco.

No, it wasn’t as philosophically complex as Jack Kirby’s wonderful original MM series, which sprang out of 2001: A Space Odyssey, but it was damn close. It’s been reprinted a bunch of times, and if you’ve never read it, give yourself a treat and check it out.

When the first Hercules mini came out, I bought it because I was a bit of a Marvel zombie. I didn’t really know the character, or care about him. But Bob Layton’s work on Iron Man was enough to make this a “buy” for me.

I’ll make the controversial statement that Layton’s Hercules work is better than anything he did for Tony Stark (excepting maybe Demon in the Bottle). The first series kicked into high gear immediately, showing us a future in which Hercules is still irritating the crap out of Zeus, so he’s banished. But unlike Odin, Zeus doesn’t send Hercules to Earth—he sends him across the galaxy. The thing that’s great about this is Hercules doesn’t seem to care. He’s having a blast, getting drunk off alien wine and nailing more green ladies than Captain Kirk. It’s like when you try to punish a puppy and all it does is bounce around and lick your face.

Annoying. And charming. And funny as hell.

Remember how I said the Falcon mini was an attempt to turn a B-lister into a marquee character, but it failed. Well, Hawkeye succeeded. Mark Gruenwald, who at the time was writing a rocking Captain America run, teamed up with Brett Breeding, on a book that turned Clint Barton from an Oliver Queen rip off to a dude with his own personality, a kick-ass girlfriend, and a cool air bike.

And he married his kick-ass girlfriend in this series.

In the 1980s, Marvel was willing to bank on a new character by giving them their own miniseries as a form of introduction. They also did it for Rocket Raccoon in the same year. Can you imagine that happening today? I can’t.

Ann Nocenti’s Longshot mythology was deep and complex, and all of it started here, in 1985: Spiral, Mojo, all of that. It’s pure Nocenti.

The other major introduction was Art Adams, who nobody really knew until he burst onto the scene with this miniseries. I’ll never understood how Jim Lee and Rob Liefeld got so much cred, but Adams never really became a comic art institution. 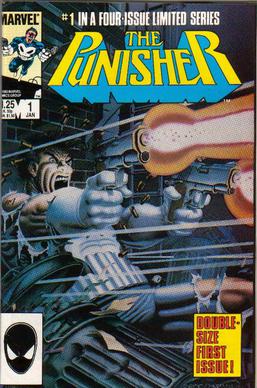 AKA “Circle of Blood,” this was the book that really matured the Punisher character into something readable—and beyond “that guy who shoots people using guns bigger than his own torso.”

Also: Art by Mike Zeck, who worked on my #1 pick as well.

He was one of the best artists to emerge in the ’80s, even if his barrel-chests and big biceps probably contributed to the over-muscled style of the ’90s.

Deconstructing superhero mythology is commonplace today, but Mark Gruenwald’s 12-issue miniseries about Marvel’s alternate-Earth answer to the Justice League was one of the first of its kind. Over the course of 12 issues (labeled a “maxi series,” a term dropped in the 1990s because it sounds way too much like a feminine product), Gruenwald shows what happens when superheroes try to remake the world as they see fit.

This was before Warren Ellis did it in the pages of The Authority, and before Alan Moore’s Marvel Man came on the scene, too. By today’s standards, the writing is a little heavy, but by any measure it’s still sheer brilliance.

Jason and I agree on our top two picks. Secret Wars was the first of its kind: Every major Marvel heroes and several minor ones “disappear” from the pages of their own comic books, only to return the following issue. The time gap is filled by a 12-issue miniseries in which Spider-Man gets his symbiotic black costume, Thing abandons Earth, and all kinds of wicked cool fights happen.

Okay, maybe it wasn’t technically the “first” of its kind. It was preceded by a vastly inferior three-issue mini called Contest of Champions in 1982, but that was really more of a scavenger hunt than a “super hero war.”

Plus, Secret Wars had this:

Secret Wars remains, in my view, the perfect “event.” You didn’t have to buy it. None of the cross-overs were essential. Regular Marvel storylines could continue with just a mention of the series. The creators had sufficient pedigree (Jim Shooter and Mike Zeck). And in it, your favorite heroes and villains fought a lot. There were a few major(ish) changes to the MU after it, but nothing you couldn’t easily pick up by reading only the books you already were reading.

Does anybody remember laughter?

Chris Claremont and Frank Miller turn the cool supporting character in X-Men into the dude who was in every single Marvel comic published in the 1990s. Absolutely brilliant in every way. But I already told you that  so you already knew it.

4 thoughts on “THE BEST MARVEL MINISERIES OF THE 1980s”